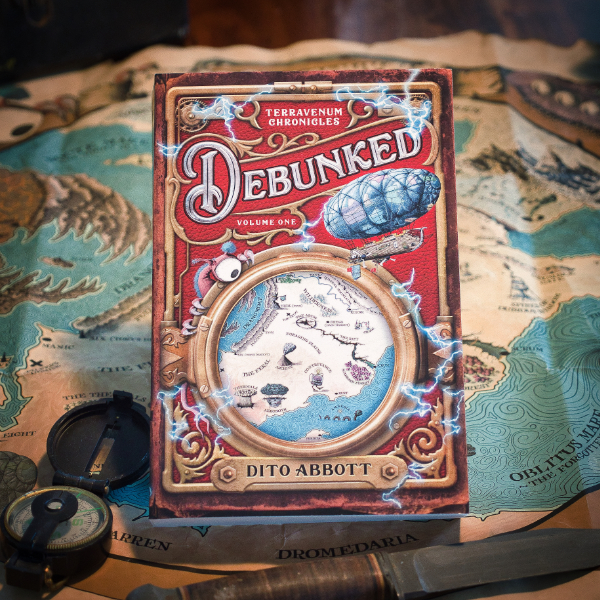 Some of my favorite scenes end up on the cutting room floor in revisions. While they may not have earned their place in the official Book, they make for fun content for readers who want to dive deeper into Terravenum. Enjoy!

SPOILER WARNING
The following deleted scenes, chapters, and footnotes should only be read after finishing Debunked.

SCENE 1: Flashback to Sir Quidby giving Ozzie the token that opens Noko’s box. This scene originally happened in Chapter 4 when Ozzie was trying to open the box. I like how it gives us more background into the Forsythe family dynamic. Ultimately, it didn’t survive revisions because it slowed the pace of the story too much.

Grandfather gave him that coin after returning from a failed expedition to the Amazon basin. The explorer deflected questions about his rescue with a smile, but a stiff upper lip couldn’t disguise bone-weary fatigue and night terrors.

When muffled shouts summoned monsters to Ozzie’s closet for the third night in a row, he crept downstairs to investigate. He peered through a keyhole in Grandfather’s door and saw the old man sitting in bed, gripping a Viking sword like he was staving off a balrog. A creaky floorboard betrayed him, and Grandfather called out, “Who goes there? Show yourself.”

When Ozzie pushed the door open, the Professor adjusted his spectacles, then sagged with relief. “My boy! Come in, come in.” Grandfather swaddled him in blankets, brewed two cups of tea, then spun fantastic tales of far-off lands where extraordinary beasts ruled the ocean and sky.

Ozzie must have fallen asleep because when he opened his eyes, sunlight was flooding through the curtains. His grandfather rocked in a chair, toying with a small silver coin and staring into the distance. When Ozzie stirred, Sir Quidby reached for his pocket, then froze. His jaw worked silently, in conflict with his thoughts until, in typical Forsythe fashion, stubbornness and pursed lips won the day.

“I would like to give you something,” he said, “something very special.” Grandfather extended his arm and opened a trembling palm. Ozzie’s jaw dropped. The coin was gorgeous – silver, bejeweled, and mysterious, it was everything a ten-year-old who scribbled treasure maps on his wall dreamed of. A knowing smile tugged at the corners of his grandfather’s mouth. The explorer leaned in and whispered, as if someone might overhear, “Mysteries unlock themselves to anyone sufficiently curious to turn a key, Ozymandias. Guard it with your life.”

Scene 2: This chapter was a slice-of-life peek into the DEWACS (Drog Early Warning and Capture System) control room during Dr. Bronk’s fateful shift around Chapter 45. I loved the idea of Drog-obsessed guards becoming closet fans of their target. In the end, it wasn’t worth adding an additional POV to the book.

Dr. Bronk reclined in his ragged office chair, gnawing a bagel and absentmindedly flipping through a binder of incident reports. Daylight shifts were the worst – all the good stuff happened after dark. He checked the clock. Only two hours to go.

In theory, DEWACS (Drog Early Warning And Capture System) was a volunteer initiative that coordinated the city’s response to the notorious canine’s nightly reign of terror. In practice, the program was widely ridiculed as a club for Drog-obsessed conspiracy theorists.

Bronk swiped crumbs off his homemade Drog Squad t-shirt and shelved the binder in an empty slot among twenty-seven identical volumes. He flicked a Drog bobblehead, checked his watch, and reached for the microphone. A sharp squeal of feedback heralded his hourly update.

“This is DEWACS Central reminding you that as of thirteen hundred hours, we remain at Code Crimson Zeta, Mark Six. Please maintain vigilance and avoid transporting experiments without an armed escort.” He mumbled the last sentence, knowing that security warnings were wasted on his audience.

Bronk wheeled his squeaky chair to the far end of the incident report shelves and retrieved the latest binder. His gut told him there was a pattern to Drog’s recent attacks, but a common thread eluded him. He stood up and paced, resting the binder on his belly as he flipped through reports.

Dr. Vispoy was back in the infirmary after pulling eighteen Gs in her centrifuge. A forensic team documented teeth marks on the regulator circuit and no sign of a missing brake. Classic Drog. Bronk poked a red pin into an icon of the G-Force lab on the bulletin board.

A pneumatic tube clonked a red message pill onto his desk, stirring up a cloud of dust.

Bronk checked his watch and grunted. Too early for a Drog incident. He cracked the capsule open and scanned the message, his eyes widening.

Another red capsule tumbled across Bronk’s desk. He opened the lid with shaking hands.

Dr. Bronk slapped empty noodle cartons off his desk and lunged for the emergency warning button. Klaxons wailed across the city as he muscled the master Protocol binder off the bookshelf. The Drogpocalypse he’d predicted for years was happening on his watch! He keyed the mic.

Scene 3: The Diaphoresian Sock Conundrum scene was one of the times I went a litle TOO tangential. I don’t remember where I discovered that “diaphoresis” is a medical term for abnormal, excessive sweating, but it somehow worked its way into an early draft of the book. This scene originally lived in Chapter 21, when Brother Pugnacious and Brother Deathfist were discussing Garrilus the Unread. It’s just a short aside, but the stupidity of the conceit made me laugh. However, since it added nothing of value to the central story, it had to go.

“Don’t get me started,” Deathfist growled. “Seven hundred years ago, a Rustian historian discovered an inconsistency between two scrolls. In one, Garrilus alluded to wearing red socks while fleeing a herd of trumblefeet. In the other, his socks were blue. The revelation shook the foundations of Stone Lore until Cranial Dalus, a renowned contextual etymologist, demonstrated how red socks can appear blue if they contain a sufficient amount of sweat.” He cracked his knuckles. “Dalus brought us back from the brink of war, but some rabble rousers refuse to let matters lie.”

Scene 4: In early drafts of Chater 23, the Children of Contrivance on “The Asthmatic” fought with another Contrivance vessel named “The Hypotengoose” over who could claim credit for capturing Angelus. I love the idea of squabbling scientific disciplines. Also, I’ve always wanted a reason to shout, “Deploy the hover-budgies!”

Another airship breached the clouds off Angelus’ starboard rail. This vessel, proudly christened Hypotengoose by a bow placard, was propelled by hundreds of birds harnessed in a complex lattice of silken thread.

“Deploy the hover-budgies and hold position!”

A white-coated, yellow-bearded man wearing black goggles picked up a speaking cone. “Salutations! I am Dr. Suvo Lementz, and you are my prisoners.”

Indignant cries shot across Angelus’ deck from the Asthmatic.

“This wasn’t a group project! They are clearly OUR prisoners.”

Dr. Lementz hissed, “When you successfully breed birds to have bladders twelve times their normal size, then you get to decide when dibs applies.” He lifted the megaphone and shook his fist. “We claim this prize as evidence of the superiority of biological science over physical sciences. And furthermore -” Lementz caught sight of Layla and choked. Whatever misgivings the doctor had about hard sciences, he recognized an oncoming train when he saw one – within the space of a breath, he seized the reins and commanded his avian legion to dive. With a thunderous chorus of squawks, Hypotengoose plunged into a thick cloud. Lementz’s rapidly distancing voice wavered on the breeze, “My mistake! Dibs wins the day! Congratulations on your unassisted capture!”

FOOTNOTES! Ever since Terry Pratchett and Douglas Adams made me fall out of my chair laughing, I’ve adored footnotes. Here are a handful that didn’t make the cut for Debunked, but still made me smile

The Worst Battle Cry of All Time belongs to a Venetian sandwich merchant named Vespitucci Alamezzo.

In a brazen attempt to highlight the disparity of wealth between the elite (who hoarded the finest cuts of meat) and the common man (whose daily fare was limited to summer sausages), Alamezzo incited his fellow food vendors to revolt by screaming, “I Got Your Salami Right Here!”

To Alamezzo’s frustration, instead of fomenting civil unrest, he merely sold out of salami sandwiches to an enthusiastic lunch crowd.

For years, the Society for Civil Discourse relied on pamphlets to promote reasoned, logical approaches to solving inter-Guild disputes. Then they accidentally sent a pamphlet to Trodon the Obliterator, the Under-Secretary of the Mercenary League. To everyone’s surprise, Trodon was so taken by the novelty of resolving conflict without violence that he joined up.

The Society for Civil Discourse soon discovered people are far more receptive to a message of peace when it’s bellowed through a megaphone by a bionically-enhanced, seven-foot tall, musclebound warrior toting a neuron splatimizer.

They embraced their new philosophy by ordering the most intimidating weapons possible from arms dealers. This, in turn, attracted the sort of devotees who are drawn to mayhem.

In short order, the Society for Civil Discourse inadvertently founded the second most powerful crime syndicate in Terravenum. Concern within the organization about promoting peace through intimidation is tempered by a palpable smugness that no one throws SCD pamphlets on the ground anymore.

Belchgoats are responsible for ninety percent of landslides in the Quarrel Mountains.

Following the devastating Burpaclysm of 1241, mountain villages began abandoning their homes during fizzygrass season, when gas buildup reaches its peak.

Rutfangs are famously attracted to floral scents. A multitude of rutfangs is called a “spew”, thanks to the action people take when they realize the herbal tea they are drinking has put them in the direct path of a stampede.

Doctor Bulferous Lumswiggle’s groundbreaking Mime Linguistics research ended in tragedy after he attempted to communicate with an Annihilator via an experimental “slap language”.

After a lengthy investigation, the Predictable Morbidity and Uncommon Sense Committee declared, “It is the considered opinion of this committee that anyone who nags someone else to “Fold at the seams!” or “Separate the striped socks!” is asking to be devoured.”

The fangorious lump was granted a full pardon and went on to become a master sushi chef in the cafeteria.

Leonard Loses A Litter of Iguanas – A Modern Tragedy in Seventeen Parts by Twittle Timlup was ranked the fourth “Saddest Anthology” by the Society for Emotionally Manipulative Children’s Literature behind:

#3. Sorry Enzo, A Cranksnort Ate Your Favorite Snobwurm While You Sneezed by Armund Cope.

#2. You Will Never Be Tall Enough to Ride a Burlybeast, Sally by Resmut Nomore.